The Music Nairn 2018-19 season resumed with a recital by two very old friends of Nairn, cellist Richard Jenkinson and pianist Benjamin Frith.  Both men were frequent visitors at Clifton House, both as soloists, duettists and as part of larger ensembles, and have continued this tradition ever since.  Their latest performance opened with Schumann's Drei Fantasiestücke, three charming pieces originally composed for clarinet and piano, but which work beautifully on cello and piano.  Jenkinson's rhapsodic tone was beautifully complemented by Frith's exquisitely subtle touch in a beautifully detailed account of this passionate music.

The stage was set for the Cello Sonata by Ernö Dohnányi, a youthful work composed in 1899 in which this arch-romantic gives full reign to his rich imagination and exceptional piano technique.  Although the composer's Hungarian roots are tapped occasionally in this fine work, it is the almost overwhelming flood of Viennese romanticism which is most striking.  The cello part is demanding enough, but the piano part, which the composer wrote for himself to play, is phenomenally challenging, with enormous sonorous chords, surging scales and arpeggios and passages of dazzling complexity.  Frith's stunning technique took all this in its stride, while constantly finding the musical line through this demanding work.   It is good to see Dohnányi's chamber music begin to be restored to its rightful place in musical history, a process which is long overdue.

The second half of the recital opened with the Cello Sonata by another Hungarian, Zoltán Kodály, a work composed less than ten years after the Dohnányi but belonging to a whole new enigmatic sound-world.  A beautifully atmospheric Adagio, with singing cello melodies and diaphanously rippling piano figures segues into a more brutalistic Verbunkos or recruiting dance, given a wonderfully spikey and percussive rendition by Frith and Jenkinson.  Much less familiar than the same composer's wildly manic opus 8 Sonata for Solo Cello, the subject of Jenkinson's ongoing PhD studies, the present Sonata is a fine piece, again deserving of more attention.

This cleverly constructed programme culminated in Brahms' iconic opus 38 Sonata, the first of three such works Brahms composed for the combination.  The fact that the composer scrapped an Adagio and replaced it with a concluding fugal movement suggests a degree of indecision, but in fact the music has a sense of complete authority, and has become one of the mainstays of the repertoire.  Again Frith had drawn the short straw, with Brahms' distinctively flamboyant and rich piano textures sometimes rightly dominating the sometimes rather spare writing for the cello.  But particularly in the fugal finale, it was the magical rapport between the two musicians which made their account of this great work both memorable and utterly convincing.  Rapturous applause elicited a delightfully apposite encore, which picked up many threads from the preceding works – a transcription for cello and piano by the Hungarian Franz Liszt of the aria O du, mein holder Abendstern from Wagner's Tannhäuser.  Benjamin Frith, who had managed to weather a coughing fit in the Kodály and was clearly suffering from a cold, never allowed his affliction to affect a superb performance, and to my mind this was one of the finest of the many Jenkinson Frith Duo recitals I have enjoyed over the years. 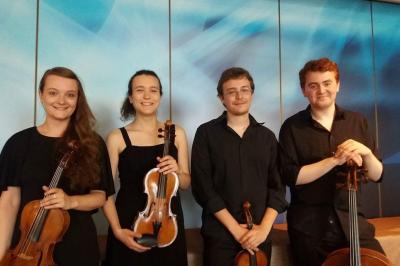