Music Nairn's marketing for Romanian pianist Daniel Ciobanu promised us an 'exciting and original' performance, and a quick glance at the planned programme featuring music by Gesualdo, Biber and Dan Dediu alongside more conventional composers seemed to suggest that this would be anything but the standard piano recital.  The actual event turned out to be even more of a roller-coaster.

As promised, Ciobanu opened with his own transcription of 3 Madrigals by the Renaissance composer Carlo Gesualdo.  Renowned for his daring harmonic progressions, Gesualdo sounds daringly avant garde even today.  Shorn of the sustaining power of voices and the context of words, I'm afraid this music just sounded weird – a very curious choice to open a concert.  Haydn's witty C-major Fantasia, alternating jokey bombast with puerile humour, proved an equally quirky choice, and it was really only with Schumann's Kreisleriana that this began to have the feel of a serious piano recital.  Ciobanu's interpretation of this masterpiece - Schumann's own favourite among his compositions – was engaging and technically stunning.  The brave and intelligent decision to restart the piece following the indisposition of an audience member meant we could enjoy the opening movements a second time, while the young pianist seemed unfazed by the interruption and gave us a masterly performance of this fine piece.

For the second half, he took a 'pick'n'mix' approach to the printed programme, opening with an unscheduled number, the Bacchanale by Romanian composer/conductor Constantin-Nicolae Silvestri.  This proved to be a wildly pagan cavort, reminiscent of The Rite of Spring, and it was given a truly feral performance by Ciobanu.  This proved to be the first of a trio of Easter European pieces, which continued with the Romanian George Enescu's 1916 celebration of tintinnabulation, Carillon Nocturne, in which night-time bells are magically evoked with luminescent tone clusters.  This set concluded with a return to the printed programme and a fiery account of Liszt's Hungarian Rhapsody no 12.  If having Romanian blood in your veins isn't actually a prerequisite for playing this repertoire, Ciobanu showed that it is a huge advantage in his wonderfully idiomatic accounts of this rich music.

A flippant arrangement by Marc André of Chopin’s famous Minute Waltz, appropriately with added seconds(!), returned us to the land of whimsy, before Prokofiev's snarky Sarcasms, a suite of five short pieces, which have been described as 'a series of sonic shocks and musical pranks', brought the recital to a fittingly unsettling conclusion.  At times too clever for its own good, this recital also featured some very fine and intelligent playing of unfamiliar repertoire.  No encore?  Well we had already had at least three in the course of a truly eccentric programme. 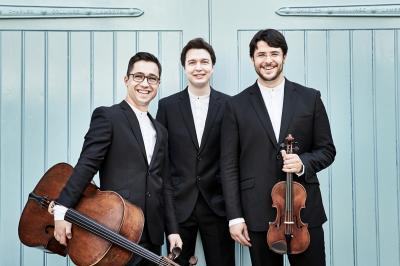